Redevelopment of the Sustainable Traffic Concept in Buckenhof

The feasibility study was aimed at redesigning the split of the existing space on the main road through the district of Buckenhof. The main focus was on the enhancement of the network structure for bicycle traffic, public transport and walking. 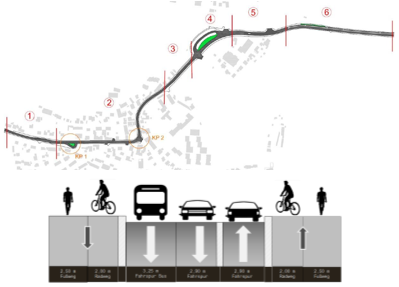 Following an analysis of the given usages and their overlaps, two variants of traffic management were developed. The network concept for the various modes of transport is based on the German guidelines ERA, EFA and RASt.

This resulted in recommendations for the implementation of the redesign in the form of schematic sketches and road cross-sections for homogeneous sections.