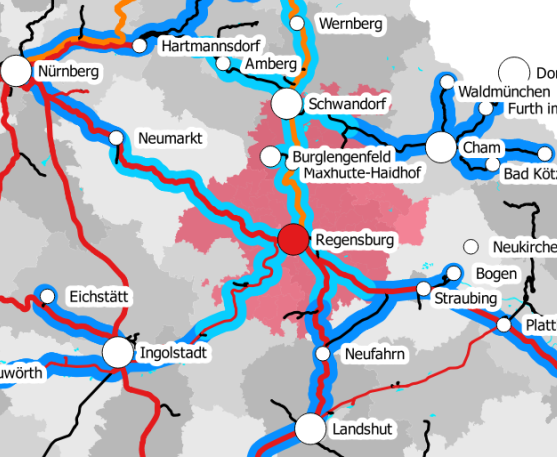 This week, the Bayerische Eisenbahngesellschaft (BEG) presented an expert report which considers the development of the local rail passenger transport (SPNV) in the Regensburg region into a suburban railway-like transport system by the 2030s to be feasible.

Against the background of a constantly growing conurbation of Regensburg with increasing numbers of commuters and growing pollution caused by the motorised individual traffic, the companies German Rail Engineering GmbH, PB CONSULT and Ramboll were commissioned to investigate the further development of the offer and infrastructure concept local public transport in the region of Regensburg.

PB CONSULT was responsible for the traffic analysis. With the help of the state transport model of Bavaria, commuter data, subscription customer data, SPNV demand figures as well as population and workplace data we conducted a traffic forecast of the SPNV network in the region around Regensburg. Based on this and the parallel planning for a new tram in Regensburg, a connection concept with the local public transport as well as demand forecasts for the years 2024 and 2034 were developed. For the approximately 15 new stations to be planned, a simplified project dossier procedure for station measures was carried out according to the standardised evaluation of transport infrastructure investments in rail-bound local public transport.

Further details on the presented expert report can be found in the following press reports: